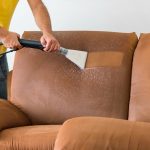 How Much Do You Tip Couch Cleaners?

Generally, carpet cleaning firms cover their costs through direct sales. In other words, they receive money from customers in exchange for services and then use it to pay their employees at the going market rate.

Carpet cleaners typically earn around $22.50 per hour. However, this can vary considerably depending on the city.

Generally, you do not need to tip carpet cleaners. However, sometimes people do because they tend to earn less than people working in other professional trades.

Once you decide that you want to tip a couch cleaner, the next question is to figure out how much. Tipping too little might be demoralising, but tipping too much could also leave you out of pocket unnecessarily.

How much to tip

Whether you decide to tip or not is very much a personal decision. Some couch cleaning companies go out of their way to pay staff high wages, motivating them to go above and beyond for customers. Others take a different view, trying to buy labour for as little as possible.

Whether you tip or not depends on the type of view that you take. For instance, you might want to tip if:

Naturally, how much you tip will depend on the quality of the work done. Tips are an incentive that you can use to get people to take more care in their work. If you’re particularly pleased with the efforts of a couch cleaner, rewarding them can encourage them to do a similarly good job in the future. If, on the other hand, you’re not pleased with their work, then tipping doesn’t make a great deal of sense. You don’t want to encourage shoddy work on your upholstery – or anyone else’s.

You’ll also want to tip if you commission a particularly difficult cleaning job. For instance, if you’re asking couch cleaners to do more work than they usually would, then tipping can serve as a powerful motivation. From their perspective, they will see what you are asking them to do as fair, since they are getting extra pay.

Whether you should tip couch cleaners or not is very much a personal decision. The size of the tip should be somewhere between $5 and $10. If the job is large – that is, it takes all day – then you may want to tip more. This way, you can cover lost tips that couch cleaners might have earned on other jobs.

Remember, ultimately, tipping is discretionary. It is entirely up to you whether you do it or not.

What Can Go Wrong When Cleaning The Couch?

What To Use To Clean Leather Couch?